SUA: Sanitation Users Associations – a committee with one representative from each household that deals with problems which arise on the simplified sewerage network

The monitoring and evaluation team is this year made up of two volunteers; one from Kite DSM and one from CDI. Reuben Chacha is a Kite DSM volunteer, he is a 3rd-year student studying Municipal and Industrial Services Engineering. Bahumi Motlhanka, the CDI volunteer, is a 3rd-year Chemical Engineering student. The M&E structures within CDI and Kite DSM are regularly reviewed, last year an M&E officer was included on the CDI central committee and this year a KITE DSM M&E officer has been added to the Kite DSM committee. The M&E teams across all projects run by CDI and Kite DSM, are now representative of both organisations.

The Theory of Change is a planning tool used by the M&E team to direct the work this summer. It is a comprehensive description and illustration of how and why the desired change is expected to happen in a particular context. The vision of the WaSH project is to provide simplified sewerage solutions for residents of informal settlements to avoid the transmission of diseases associated with unsuitable sanitation conditions.

The Theory of Change is constructed backwards after identifying the overarching goal: for the WaSH project, this is to solve the problem of sanitation in Vingunguti. It then maps out the necessary preconditions to achieve this goal, such as making sure that the residents in Vingunguti are engaged with the conversions of their pit latrines to the simplified sewerage system. The plan includes intermediate outcomes and activities relevant to all sub-teams within the WaSH project. One of the project’s intermediate outcomes is to create awareness of the importance of converting to the simplified sewerage system, this is achieved by providing training to the community on the importance of the system in relation to their general hygiene and wellbeing. To make sure that the plan is adaptable and relevant, the assumptions around which the theory is constructed have been considered, such as assuming that the residents in Vingunguti would be able to afford to adapt their latrines to join the simplified sewerage system. In practice, the theory of change shall be adapted as evidence gathered from the community either confirms or dispels the assumptions that were made initially. An example of the assumptions that are continuously reviewed is that of the affordability of the deferred payment structure. The M&E and Community Engagement teams interview residents and gather information about repayment rates and adapt the payment structure to suit the community.

The M&E team has made sure that the entire WaSH team is aware of the form of the Theory of Change so that each team can see how they fit into the ‘bigger picture’, as well as how the teams can collaborate to execute the project effectively. 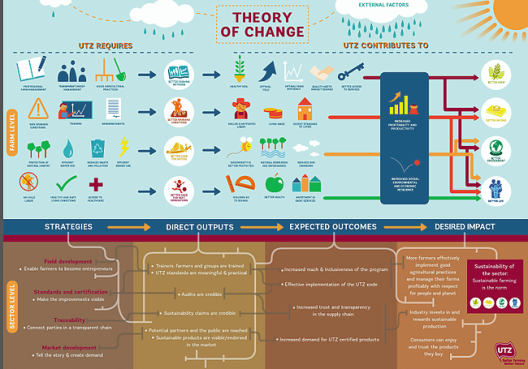 Example of a theory of change diagram – they are not normally this pretty!

Previous WaSH M&E teams have monitored community satisfaction with the simplified sewerage network because the project can only be described as successful if it is perceived as such by the residents of Vingunguti. This work has been carried out using questionnaires, focus groups and interviews, working with the community-led SUAs to coordinate the efforts.

The plan for this year:

This year the M&E team plan on building on the work carried out by the past M&E teams by continuing to engage the community on issues around the simplified sewerage network. This will hopefully allow the pilot project to keep improving to better suit the community’s needs. We plan on using questionnaires, focus groups and interviews as appropriate, to gather information about hygiene practices, perceptions of the simplified sewerage network as well as challenges facing the residents from a sanitation perspective. These methodologies are designed with the Theory of Change in mind to realise the objectives, test the assumptions made and inform the current and future activities of the WaSH project teams.

The team plans on engaging with the residents in Vingunguti who are about to connect to the simplified sewerage network this summer, which will provide a clearer picture of the lives of the residents before and after being connected to the network. This will be done using questionnaires to determine certain health and hygiene markers and see whether there are improvements in these areas after being connected to the simplified sewerage network. This was an area of data collection identified by this year’s M&E team as requiring improvement.

In addition to the work that the M&E team will be doing this year, the team will be expanding its work to include developing the framework around the biodigester to better inform future strategic decisions around biogas. This is a new area for the M&E team and they are hard at work doing research into current industry standards and are trying to find the best way to make adaptations to the framework within which the biogas project is run.