Biodigester: a device or structure in which the digestion of organic waste matter by bacteria takes place with the production of a burnable biogas and a nutrient-rich slurry.

Biogas: gaseous fuel, especially methane, produced by the fermentation of organic matter. Biogas is particularly good as it is a renewable, clean energy source (both in terms of health and environmental impacts), reducing the greenhouse effect and is also capable of producing organic NPK-rich fertiliser as a byproduct of the production process.

The biogas team this year is made up of three volunteers; one from Kite DSM and two from CDI. Amon Gracephord is a Kite DSM volunteer; he is a 3rd year student studying Municipal and Industrial Services Engineering. The two CDI volunteers (Micheala Chan and Sam Watson) are both in 3rd year and study Civil & Structural Engineering and Chemical Engineering respectively. 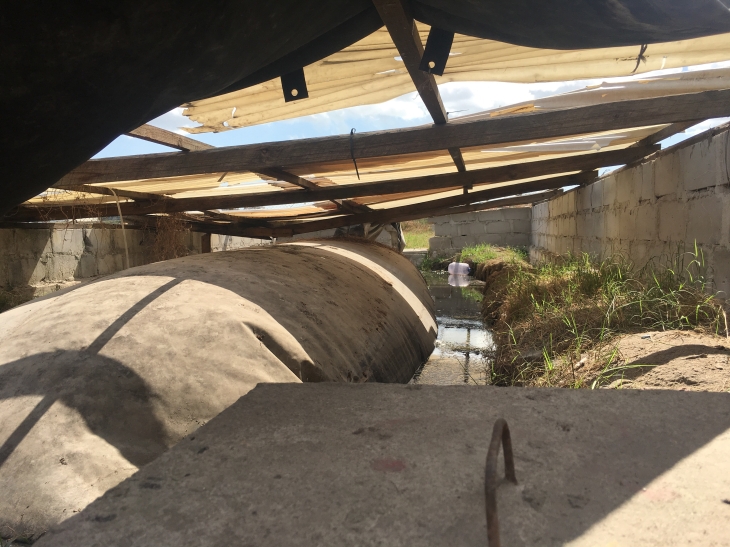 In 2015, CDI formed a partnership with SOWTech, a Cambridge-based company working on innovative solutions in the field of sanitation and waste management. In August 2015, a V40 biodigester (with a volume of 40 m3) was purchased from SOWTech and was installed in Vingunguti at the outflow of Route 4. It is made of butyl rubber, a flexible material, which allows it to stretch slightly with gas production.

The site lies next to the Spenco Waste Stabilisation Ponds. These ponds are large, man-made water bodies into which household and industrial waste flows. These ponds are used for the treatment of wastewater around the world and are especially appropriate for rural communities. 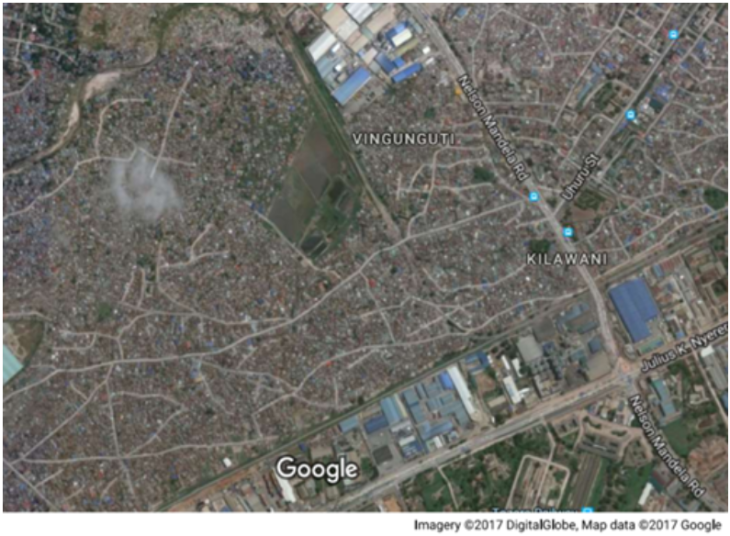 How does this fit in with the rest of WaSH?

The biodigester is an important part of the business model proposed by CDI. By creating a business model based around simplified sewerage and the biogas generator, the potential for the propagation of sanitation solutions is incentivised for businesses and is driven by the economy, rather than government funding.

In this model, a biodigester is installed at the end of a simplified sewerage network. The sewage from the network flows into the bio-digester, which digests the material and produces biogas. The plan is to sell this biogas as a sustainable, clean energy source to members of the local community. The funds generated are intended to recuperate the original investment, although this is expected to take a few years of continuous biogas production. The funds will also provide future funding for scaling the simplified sewerage networks.

The plan for this year:

The decision had been made in the last year to decommission the Flexigester as it was found that the unique environmental and weather conditions in Vingunguti made this particular model of digestor unsuitable for constant biogas production. The team will be carrying out this decommissioning in the next few weeks. A decommissioning report is being compiled to analyse lessons learned and how best to move forward with biogas in the future. This will be done in collaboration with the WaSH Monitoring & Evaluation team, who will advise on how to make the long-term vision achievable.

The biogas team has been in discussions regarding a new biodigester to install once decommissioning is finished. Although the decision has ultimately been made not to install this year (so that the business model can be thoroughly examined first), the team is taking steps to ensure the smoothest transition into the next biogas team, so that they can get into installation and testing as quickly as possible next summer. These steps involve checking the technical proposal suggested by the supplier and negotiating a maintenance contract, which is important as the aim is for the biodigester to be a reliable year-round source of biogas while CDI and Kite only operate on site during the summer.

The biogas team will be working on grant applications towards the end of this summer in order to raise funds for the future installation of digesters. This is a crucial activity, and it is important to ensure that fundraising is a continual year-round exercise, to ensure the sustainability and long-term success of the WaSH Project.

The biogas team will be taking a look at the direction in which the biogas project is headed and discussing future plans and how it fits into the WaSH project model. In this area, the team will be looking into the business plan and filling in gaps by speaking to suppliers and experts, both of biodigesters and biogas stoves, amongst other things. A survey will also be undertaken in an analogous community to Vingunguti to gauge community interest and parameters for the financial modelling and business model.

The biogas team will be working to ensure smooth handover with as little loss of knowledge as possible. This will enable teams to make informed decisions based on actions previously carried out, knowing the context of historic decisions.

In the future, it is hoped that a successful pilot of the biodigester-simplified sewerage model can be carried out. This will rely on the correct installation of a biodigester at the end of Route 4. Once gas has been continuously produced and profitability and technical feasibility have been proven, the plan is that a channel for local entrepreneurs to roll out their own simplified sewerage networks and biodigesters can be created to spread the CDI model of sustainable, scalable, community-led solutions to sanitation.